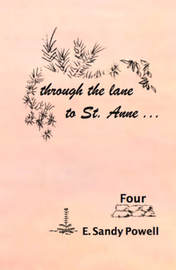 Here we are, pulling up to our final book in the “through the lane ...” series. One, Two, Three, Four, satisfaction.
If you don’t ‘get’ that, consult Chet; as crier he will definitely convey the thrill. And yes, from such a contained mise en scène I have asked that readers buy into a few myths and suspend a fair bit of ‘reality’ in order to engage in the feel-good read ... not without its occasional and necessary heart-racing panther, mind you.

Do you recall this paragraph about Celeste in the opening of Book One?

Or you could take a lifetime of ways, bounded by internal reservations and roundabouts, along which you work
at putting the puzzle of your self together, like the wood-clacky click click of pieces falling into place. As she had.

And as shown for Lorena through her meet-ups with animals, most tellingly with that very panther. By Book Four, we’ve been privy to various clickings in from the characters in Celeste’s orbit, even apart from Celeste, enough so that we can carry on imagining what's next for the lot of them after the last page turn.

By the way, have you wondered how Celeste’s home came to be called St. Anne? It was one of those ‘piece of cake’ happenstances, so like ones we all have a hand in at times, when overnight we find ourselves lifted to a new wavelength on which similar-feeling things then begin to show up. In this case, not long after he entered Celeste’s employ, so eager to surprise and please, Regoire drew on his French custom of celebrating St. Anne’s Feast Day with a menu featuring moules marinières, or Mariner’s Mussels, and the traditional Gateau Sainte-Anne. As Celeste forked a bite of the melt-away cake to her lips, a phrase tumbled forth, “oh St. Anne’s!” That evening other exclamations followed as she thanked Regoire, “such a feast for St. Anne’s.” On it went and so it was, Celeste and Regoire had set the flavor and feel. Everything that came thereafter simply became “St. Anne’s.”

Each One Two Three Four sojourn through the lane has heightened my fondness for these characters. I'm glad you've enjoyed knowing them with me, and for a time being a part of their world, St. Anne's.